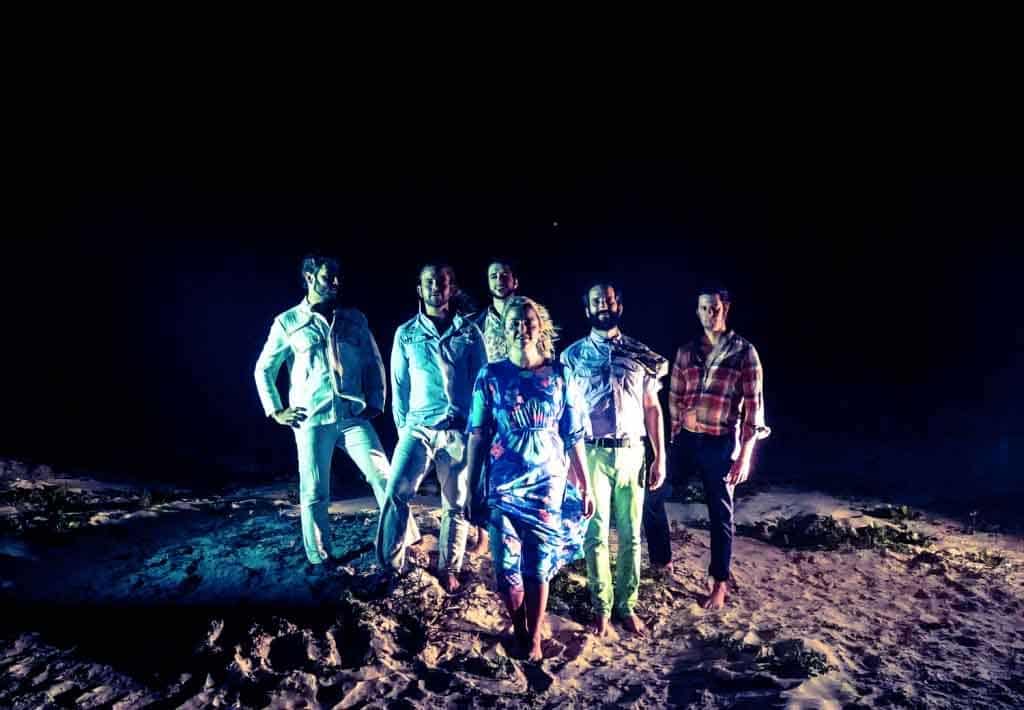 To attempt to put Calliope Musicals in a specific category would yield a variety of labels; a psychedelic folk band, an experimental art collective, or even a high energy, circus-esque performance group. In actuality, Calliope Musicals is all of those things. Hailing from Austin, Texas, Calliope Musicals is widely known as a band of charismatic, vibrant musicians who capture the eclectic vibe that permeates through the Live Music mecca they call home. Their intrinsic authenticity and talk-of-the-town stage show has already provided them with musical accolades including write-ups in Billboard and Paste Magazine. Their single “Party Master & the Space Brigade” was featured on NPR Music’s “Songs We Love” and The Austin Chronicle revered them as “Technicolor folkies [who] concoct eclectic dance-rock jubilee for the barefoot crowd.” KUTX’s Austin Music Minute said “Equal parts folk, roots and pop, Calliope Musicals blissfully spins multi-colored psych with arms outstretched to dizzying heights. Approach with open heart, open mind and open ears. Needless to say, this will make you happy.”

Already a creative staple in the Austin music community with live shows that are exuberantly contagious, Calliope Musicals have no plans of slowing down. This year they will release their highly anticipated full-length album, Time Owes You Nothing, on April 15. The album was produced by Kevin Augunas (Edward Sharpe and the Magnetic Zeros, Cold War Kids), mixed and engineered by Gavin Paddock and Andy Dalton and mastered by Pete Lyman, (Pat Benatar, Jason Isbell, Banks, Ben Harper). According to front woman Carrie Fussell, the album, which was recorded at Fairfax Studios during a month-long stay in California, is “colored with excessive amounts of Jesus Christ Superstar…what came out is an album that inspires us and one that we hope will inspire others to push boundaries and be their favorite version of themselves.” In true Calliope Musicals fashion, the album release party will be accompanied by a huge blowout party, with all the bells and whistles associated with their live performances.

Though widely known throughout Austin for their high-energy performances, Calliope Musicals are no strangers to the festival circuit and touring lifestyle as well. They recently completed their 6th tour across the U.S. in October 2015 and have traveled all over the United States and Canada to perform at a variety of festivals. The list includes Austin City Limits, UTOPiAfest, Wakarusa, Joshua Tree Music Festival, Backwoods Music Festival, Evolve Festival, Center of the Universe, Untapped Festival, Higher Grounds Music Festival, Red White and Blue Ball, and Head for the Hills.

While the band describes their style as psychedelic party folk, the actual sound—a harmonious blend of drums, guitar, bass, a hybrid instrument known as a xylosynth and Fussell’s powerful voice—is hard to define and varies substantially by song. What is consistent, however, is the element of storytelling that courses through every track in the Calliope catalogue.
“Our music centers around a certain energy more than a certain style,” the perpetually barefoot Fussell says. “We’ll do rock, then dance-y disco, then some slow sit-down [songs]. At the end of the day, it feels like the music revolves around imagination and adventure more than it does a specific type of music.”

That imagination and sense of adventure has been a source of inspiration for the band and beautifully translates through every track, regardless of its melodic variety. For example, “Echo of the Whoos,” the second track off of their freEP, was one of the first songs that the band’s current lineup tackled. Fussell had written the lyrics and vocal melody quite some time before the band picked it up, and the “Whoos” were added after she brought it to the whole band as a response to their instrumental collaboration. Fussell explains, “I was inspired by Studio 54; the nostalgia that my generation has for that period of time, and the way that we sometimes blame our current decade for our inability to cut loose and have fun. Almost as though there was never a better time or place to feel good and be yourself as New York in the 70’s. We wanted a song that created movement in our crowd, and the hook “you can do it, too” is so encouraging. People have this idea that only really famously fabulous people can have their dream life, and it just isn’t true! Good times are for everybody. The verse lyrics nod to very exclusive experiences, whereas the chorus is this wildly romantic encouragement against exclusivity.”

But lyrics and sound aside, perhaps the most captivating aspects of the group’s show are the integration of props and their focus on crowd involvement. During most performances, beaming audience members can be found swaying with sparklers, bouncing with balloons, and singing along while waving cardboard signs hand-crafted from Shiner Bock boxes—all handed out by animal-costume-attired friends of the band. NPR Music’s “All Songs Considered” may have said it best: “Who brings a confetti cannon to a fun fight? Calliope Musicals does.”

“The vibe we want to create is the feeling that the audience is part of the creative process and part of the performance,” says Fussell. “I think we always just hope that people leave our show feeling empowered and inspired—like they can do anything.”

The six-piece group makes it incredibly difficult to try to maintain a straight face at one of their performances. Their live show is an auditory, visual and genuinely transcendent experience filled with confetti, glitter bubbles, laughter and everything in between. Their shows are playful, bright and are altogether lusciously uplifting.

Their group synergy adds up to more than six musicians playing with loving skill and telling their story of loving art, loving each other and loving their collective vision. The collaborative, familial nature of their performances and music came naturally from their work with Circus on the Moon, the local collective they helped start. They’re seeking and promoting the genuine freedom that comes from making music on their own terms. Calliope Musicals has only begun their imminent climb to super stardom.