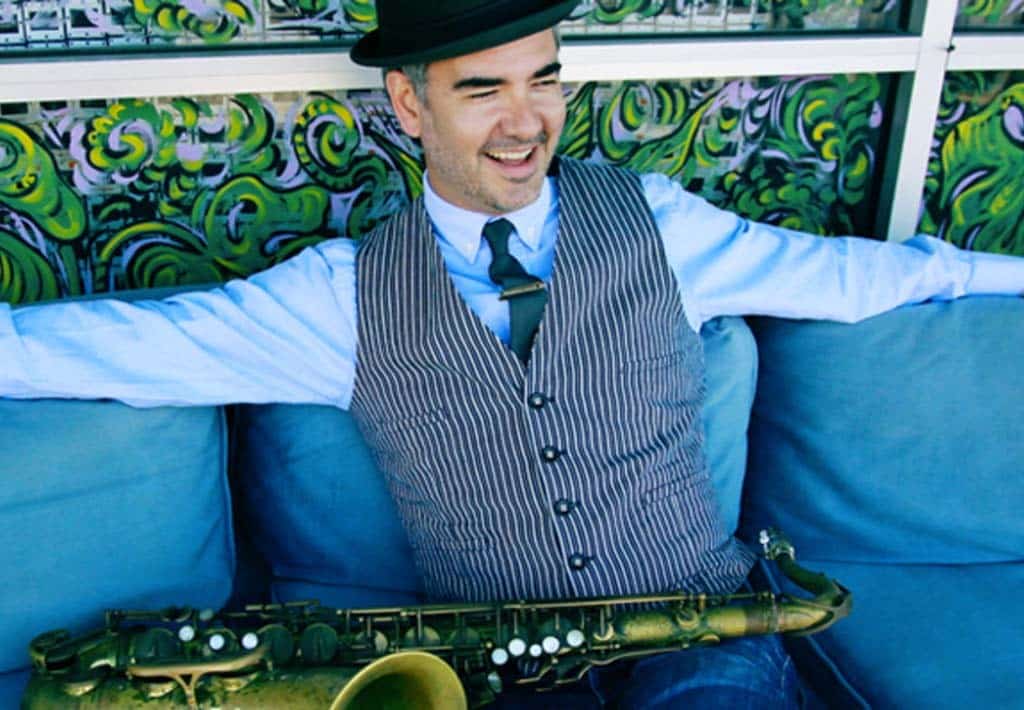 Over the span of his 25-year music career, native Texan and Austin resident Elias Haslanger has carved a unique and distinguished place in jazz history as a saxophonist, composer, and band leader, whose playing and writing has drawn comparisons to John Coltrane, Sonny Rollins, Ben Webster, and Wayne Shorter. He has performed, recorded, and toured with many world-class artists including Ellis Marsalis, Maynard Ferguson, Christopher Cross, Asleep at the Wheel, Alejandro Escovedo, The Four Tops, and The Temptations, among many others.

Elias has performed around the United States and Europe at clubs like Snug Harbor in New Orleans, Jazz Alley in Seattle, The Elephant in Austin, and The Blue Note in New York. He has also served as a guest artist/lecturer at universities around the nation. Mentored by the legendary saxophonists Harvey Pittel and Dick Oatts, Elias began to explore the instrument’s vast potential by studying saxophone at the University of Texas and then at the Manhattan School of Music. His interest in writing music culminated in a Master’s Degree in Composition at Texas State University (TSU) in San Marcos.

In 1996, Elias recorded his second CD as a leader entitled For the Moment, which received substantial national airplay, reaching #11 on the Gavin Jazz charts and #14 on the Jazziz Radioactive chart. Herb Wong from JazzTimes magazine wrote, “Haslanger is clearly in the forefront of the young, new, fresh players. He has respect for tradition as well as being himself. He is a merger of the past and the future.” Elias was awarded “Best Horn Player” by the Austin Chronicle in 1997, as well as the Jazz Instrumental Soloist College Outstanding Performance for the 20th Annual Downbeat Student Music Awards. In 1998 TSU awarded Elias the Mitte Scholarship for academic achievement, and Elias began to teach music theory and composition at the university.

That same year, Elias collaborated with the patriarch of the modern jazz scene, Ellis Marsalis, to release Kicks Are for Kids, of which DownBeat magazine writer Michael Point wrote, “Haslanger is now a full grown talent, both as a composer and instrumentalist whose future has almost unlimited potential and should be regarded in national terms.”

Kicks Are for Kids won praise from fans and critics around the world, and the recording was recognized as one of the top five jazz records of the year by Rick Mitchell of the Houston Chronicle, while the Austin Chronicle’s writers Jay Trachtenberg and Christopher Hess voted it the #1 and #3 best records of all Austin artists. DownBeat’s writer Michael Point voted Kicks Are for Kids as one of the top ten best CDs to come out of Austin in the 90’s, and it reached #4 on the Gavin Jazz charts with 180 radio stations around the country playing it. Elias was also awarded “Best Jazz Group” by the Austin Chronicle later that year. During this time, Elias continued to teach theory, saxophone, and composition at TSU before moving to Brooklyn, New York in 2000.

While living in Brooklyn, Elias was contacted by jazz trumpeter and musical icon Maynard Ferguson and invited to tour the United States as part of his Big Bop Nouveau band. As the featured tenor soloist in the band, Elias held the same chair Wayne Shorter had held many years earlier, and the experience touring with Maynard helped to shape Elias’s philosophy as a band leader and performer.

Since returning to his hometown of Austin in 2004, Elias has kept an active performing and recording schedule, including founding the label, Cherrywood Records, releasing the 2006 recording Dream Story, the 2012 recording Church on Monday, and performing weekly engagements in Austin, Dallas, Houston, San Antonio, and New Orleans. 2012’s Church on Monday quickly drew international attention and as a result, Elias and the band won Best Jazz Band in the 2012-13 Austin Music Awards. That summer, Elias was profiled in the June 2013 issue of DownBeat magazine due to the success of the album.

Elias recently celebrated the release of his 6th CD as a leader, LIVE at the Gallery, featuring Texas jazz icon Dr. James Polk, the former musical director for Ray Charles.

Says Michael Jackson in the June 2014 issue of DownBeat magazine, “[LIVE] is one of the most enjoyable, raucously swinging, unpretentious yet adventurously soulful albums I’ve heard in a month of Sundays… Haslanger’s freewheeling licks roar with virtuosity and infectious joie de vivre. 4 1/2 stars”

Elias and the band, which also features guitar virtuoso Jake Langley, hold a residency at Austin’s famous Continental Club Gallery every Monday at 8:30 pm. The CD is currently in the midst of an 13-week rotation on radio stations around the United States and Canada, climbing as high as #14 during its run on the JazzWeek charts and is receiving positive reviews from writers and fans across the globe.

In February of 2013, Elias was short-listed by the Texas Commission on the Arts for the role of State Musician of Texas. This prestigious position has previously been awarded to Lyle Lovett, Ray Benson and Willie Nelson and is a reflection of Elias’s hard work and dedication to advancing the arts in Texas. The start of 2014 saw Elias and Church on Monday featured as part of Alejandro Escovedo’s United Sounds of Austin, the acclaimed review of the history of Austin music. In their review of the show, Rolling Stone magazine said Church on Monday “brought the house down”. Most recently, Elias was asked to perform with Sheryl Crow, Doyle Bramhall, Jr., and Grammy-award winners Grupo Fantasma for Austin City Limit’s 40th Anniversary show which will air October 2014 on PBS.

Says Glenn Astarita of AllAboutJazz.com, “Simply put, Haslanger is a major talent who could find his way into the upper echelons of jazz with a judicious marketing push and smaller gaps between recordings.”

Elias embeds the best of classical influences – from Ricard Strauss to Sergei Rachmaninoff; of rock and pop legends – from Nat King Cole to the Beatles; of the profound and powerful heritages of jazz greats – Duke Ellington to John Coltrane.