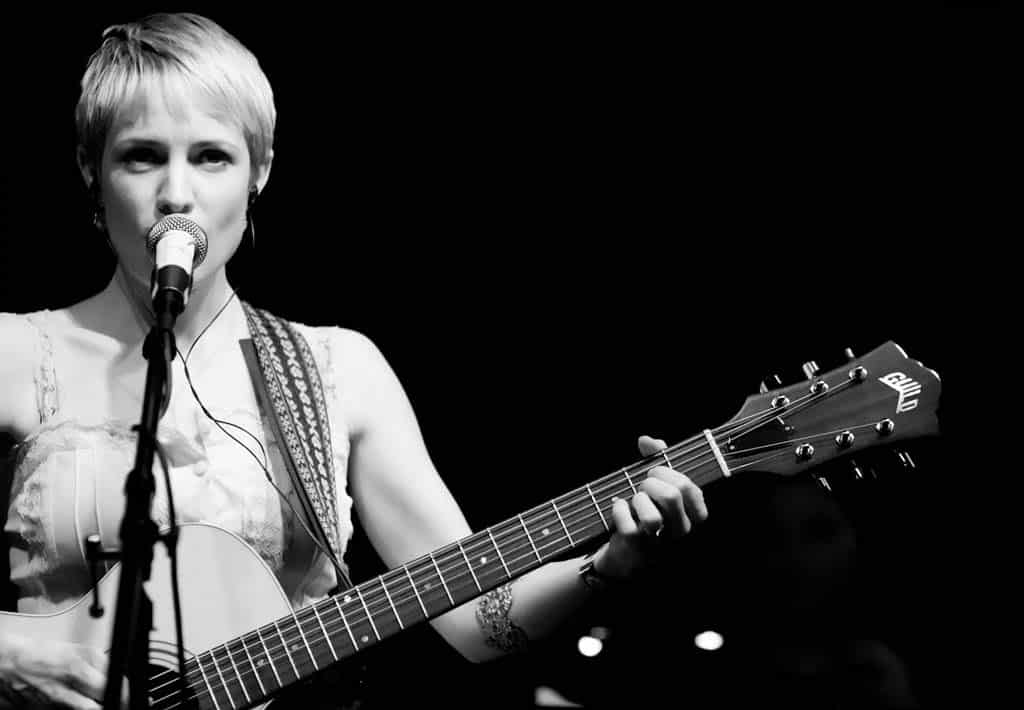 Hello! First of all, thank you for joining Black Fret. By supporting musicians, this organization will be fundamental in preserving Austin’s authentic music culture. Regardless of my own nomination, I am so proud that Black Fret lives here in Austin, and I can’t wait to see what happens.

Okay, on to the BIO:

As a kid, I LOVED musical theatre. The music, the makeup, the lights, the tights! My Grandma is also a performer, a classically-trained singer, and music teacher. She believes that singing heals people.

I was raised at the U.S. Naval Academy, in Annapolis, Maryland. So, when I came to Austin to attend the University of Texas, the laid-back lifestyle was like a revelation. I picked up guitar in college and started writing songs, as therapy. I traveled a lot – and you can always find a guitar somewhere. One night in the gorgeous medieval reverberations of the Abbaye d’Ardenne in Northern France, I first sang for my traveling companions. That’s how it started.

After college, I had corporate jobs (technology recruiting, sales, and project management) and made music in my spare time. In 2005, I was one of 10 people selected for the week-long Red Bull Music Lab in Dallas, where they teach you how to use music software with cool names like Logic and Reason. It was the first time I was able to eat/sleep/breathe music and I got totally addicted. And now, I had tools.

In 2007, I figured if I was going to work hard anyway, I’d rather work for myself in a fulfilling career that required more heart (blood), dedication (sweat), and risk (tears). I moved to Portland, Oregon for a few months – sight unseen – to make my first album, called The 11th Floor (named after the penthouse at the Stoneleigh Hotel, where the Red Bull Music Lab was held). When I returned home to Austin, I started booking gigs around town and selling my new CDs out of my car.

That’s basically still how it all works today, though I’ve grown my team and scope. Being a creative entrepreneur is a job like any other – it takes hard work – but I get to meet the most incredible people, and see the most incredible places – opportunities that could never come from any other scenario than the offering of my voice and songs.

Music is such an amazing thing to experience and especially to share. I feel incredibly blessed to have a life surrounded by music, musicians, and music-lovers. I will keep it up until I die, because it’s a pretty great way to live.

Urban folk songstress and Texas Music Magazine Artist of the Year, Erin Ivey is hailed by the Daily News as “a songwriter of the first order, with her jazz-inflected vocals and seductive melodies, Ivey has everything it takes for stardom.”

On the heels of multiple Top 10 lists for her 2013 album Dreamy Weather, Erin’s February 2014 release Whisper of the Moon is a powerful collaboration with Tosca String Quartet, a CD/DVD collection of original lullabies and lightly-dark fairy tales.

Erin Ivey has “quietly become one of our city’s biggest critical successes” claims KUTX radio, garnering shoutouts from Perez Hilton, winning the Grand Prize in the 2012 Discoveries Songwriting Contest, and as a regular Critics’ Pick at SXSW.

Erin has played countless shows nationwide, supporting acts as diverse as Ralph Stanley, Norah Jones, and Los Lobos. Think Linda Ronstadt, Jeff Buckley, and Mazzy Star and you will be in the right constellation.

Erin is honored to join Heart, Emmylou Harris, Indigo Girls, and Shawn Colvin on the GRAMMY Festival at Sea cruise this November 2014.