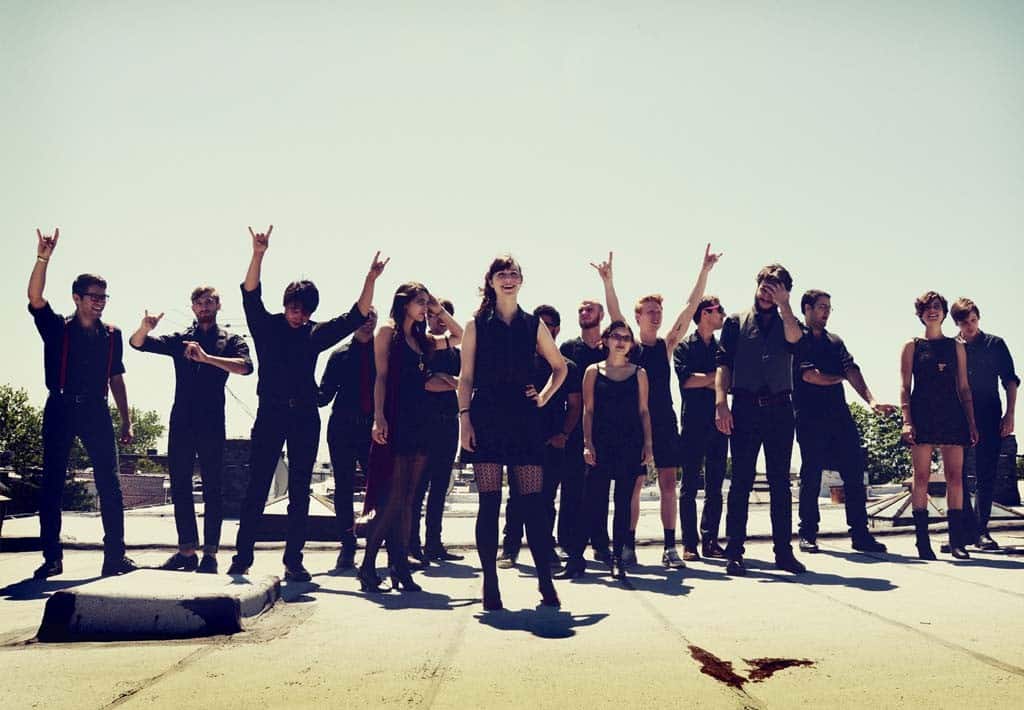 In June 2013, seventeen young musicians piled into two vans and drove from their hometown of Austin to a brownstone in Queens, where they took up residency for a month. It was Mother Falcon’s first trip outside of Texas and another turning point in a very unlikely story.

Years before, when he started what became Mother Falcon, it never crossed cellist Nick Gregg’s mind that his goal to make playing cello as cool as playing quarterback at his football obsessed high school (alma mater of Super Bowl MVP Drew Brees) would get anywhere. Jamming on original material after school with fellow orchestra students at Westlake High was fun, but not radical and certainly not goal oriented. Yet, over months, word of this orchestra jam session spread and the group, now named Mother Falcon after a misheard TV overdub from Die Hard (“Yippee-ki-ay Mother Falcon!), began to include people from McCallum High as well. Before any of its members had graduated, Mother Falcon was featured on the cover of the Austin Chronicle and was playing gigs all over town. While most of them were still teens, Mother Falcon, now numbering up to twenty two players, had become one of Austin’s most popular and beloved “bands” with the release of Still Life, their debut EP of classical-crossover pop songs, and another Austin Chronicle cover story. The next year their first full length, Alhambra, saw major local airplay and a series of sold out local shows. Somehow, while its members were focused on being college sophomores, this wild idea of being as cool as a quarterback had made Nick Gregg the founder of one of the coolest bands in one of the world’s coolest music cities. Yet, as Mother Falcon won multiple Austin Music Awards, collaborated with Austin legends like Alejandro Escovedo and Christopher Cross and ventured to Houston and Denton, it still didn’t seem plausible that such a huge ensemble could make an impact outside of Austin.

As the bulk of the collective’s musicians approached college graduation in 2013, this unlikely indie orchestra was at a crossroads. With the need for employment looming, perhaps the easiest choice would be to backburner the band, maybe keep playing around Austin until everyone spun off on their own: grad school, jobs, other bands. Mother Falcon, by now a community with deep ties (among them two pairs of siblings and several relationships begun in childhood) made a tougher choice, committing to a new album and an unusual strategy of moving to other cities for a month at a time to cut costs of touring such a large group. After making a huge splash at SXSW 2013, second album You Knew dropped in May 2013, strongly impacted national radio and gained major support from NPR. June residencies at Joe’s Pub in New York and Littlefield in Brooklyn were followed by residencies at The Echo in Los Angeles and Soda Bar in San Diego. Subsequent national tours found Mother Falcon unexpectedly selling out small clubs all over the country within months of their first tentative steps outside of Austin. Nick Gregg was now undeniably as cool as a quarterback.

Two years later, Mother Falcon return with their third full-length album Good Luck Have Fun, slated for release August 14th on BitCandy Digital and Punctum Records. Seven years, two albums and hundreds of shows on from Westlake High, this unlikely indie orchestra takes a leap into the unknown, blowing up their usual way of composing and recording together in a conscious effort to push themselves into new stylistic and sonic realms.

As such, Good Luck Have Fun doubles down on both sides of Mother Falcon. The adventurousness is more adventurous, with fully half the album comprised of experimental instrumental soundscapes composed as the score to an upcoming documentary about competitive gaming. Inspired by Bowie’s Low, 60s improv iconoclasts AAM, Koji Kondo’s score for Majora’s Mask and the psychedelic drone of Fuck Buttons, the instrumental pieces ebb and flow in tension between unresolved crescendos and throbbing, jagged minimalism. Conversely, the rest of the album may be Mother Falcon’s most accessible music ever, with a stronger emphasis on rhythm, concise arrangements that move the vocals to the fore, lyrics grounded in universal themes and a wealth of hooks, upon hooks, upon hooks.